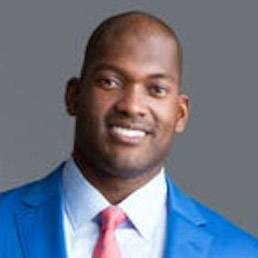 ​Winston Justice is an Investment Manager at Bernstein. After his NFL career (2006-2015) with the Philadelphia Eagles, Indianapolis Colts and Denver Broncos, Winston entered the financial industry. Under Wells Fargo Securities, he was an analyst and managed money for Institutions and Family Offices. Along the way, he co-founded MJC Capital, an early stage investment vehicle; Elixr, an award-winning gourmet cafe and roastery and served as the portfolio manager for PIA’s Alternative Investments Group, where he was mentored by Lloyd McAdams. Winston holds an MBA from George Washington University, BA in Public Policy from the University of Southern California and the Certified Investment Management Analyst (CIMA) designation from The Yale School of Management. His deep dedication to philanthropic work includes board member positions, 2010 Walter Payton Philadelphia Man of the Year Award, Habitat for Humanity of Collier County, Young Life Naples, and Eagles Fly for Leukemia in Philadelphia, PA. He also serves as a finance adjunct professor for The Lipscomb School of Business. He recently relocated to Nashville with his wife Dania and their three children – Selah Israel, Calais Shalom, and Talitha Nazareth.

Sign up to our newsletter for updates on all things Summit! We'll send you updates on speakers, events and exclusive Litecoin news.

Litecoin Summit 2022 offers the unique opportunity to engage directly with investors, innovators and leaders in the cryptocurrency, emerging technology and blockchain space.

The Summit offers a range of sponsorship packages, suited your company’s marketing needs and budget. To learn more, please submit an enquiry below, or email sponsorships@litecoin.net.

We'll be back in touch with more details ASAP!

Thank you! We'll be in touch shortly
Please try again.